The mission of the Venice Museum & Archives (VMA) is to collect, preserve, and interpret historical and prehistorical material relating to the city of Venice and its neighboring communities.

VMA has a collection of 30,000+ photographs, archives, objects, and publications pertaining to area history and is housed in the historic 1927 Triangle Inn building. The museum engages the public in local history through changing and permanent exhibits, tours of the Triangle Inn, special events, newsletters, social media, as well as onsite and offsite educational outreach programs to youth and adults. Additional services offered also include assisting the public with research requests and assisting with image request orders. The museum’s gift shop offers books, DVDs and other merchandise pertaining to local history available for purchase.

IN THE GIFT SHOP
Lost Buildings of Venice Shirts 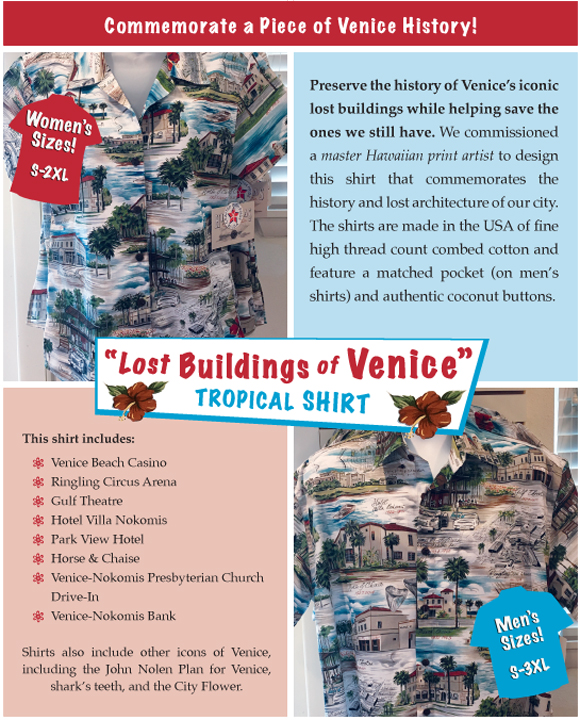 Now available for $75 in our gift shop. The fabric is 100% cotton and custom designed by a California artist, and depicts 8 lost buildings, shark teeth, hibiscus flowers and the Nolen plan.  Mens sizes M-3x and Womens S-2x. Unsure of sizing? Just bring in a shirt that fits and compare, or see size chart. Venice Museum Gift Shop is open MTW from 10am-1pm, or buy online at https://www.veniceheritage.org/shop/. 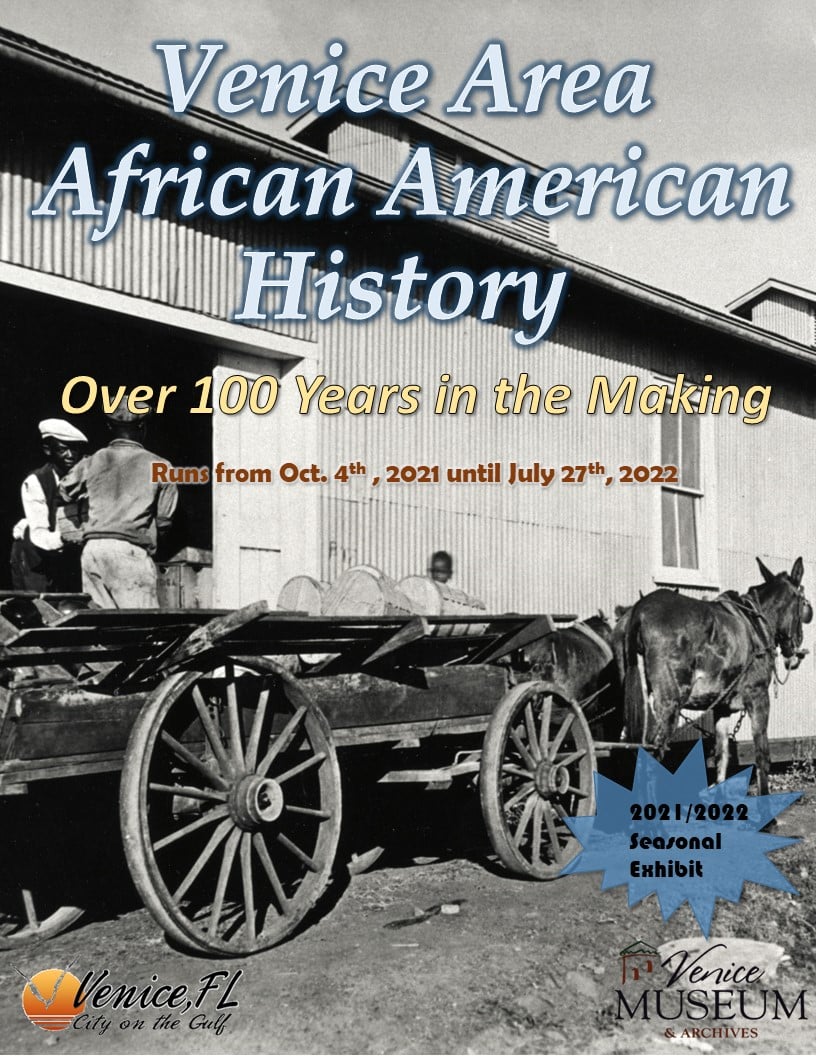 This educational exhibit details the establishment, roles, and accomplishments of the African American community. Learn about the stories of building a community, fighting for improved housing, and experiencing racial integration during the turbulent 20th Century.

Grand Homes Walking Tour with Architectural Historian, Sebastian Liseo.  These tours are very popular and sell out, so register today! CLICK the flier for all details.

The City of Venice (COV) is the parent organization of the VMA. Museum staff are COV employees under the Department of Historical Resources. The Venice City Council is the governing authority for the VMA with legal and fiduciary responsibility for the museum and for approving museum policy and its annual budget.

Institutional History
Organized through the Friends of the Venice Library, on May 10, 1974, the first Historical Committee meeting in Venice, Florida was held. The Historical Collection was established in 1975 by the committee and was originally stored in a closet at the downtown Venice Library branch. In 1976 the name Venice Area Historical Collection was adopted for the collection. The City of Venice established the Venice Historical Committee in 1982. By ordinance in 1987, the City of Venice created the Venice Historical Commission and the position of Director of Historical Resources, a volunteer position at that time. The city’s Planning Department provided technical and clerical support for both the commission and the director. The jurisdiction of the commission for the “Venice area” was defined as being from Blackburn Road in Osprey South to Manasota Key.

A Custody Agreement was signed in 1988 between the Friends of the Library and the City of Venice for the COV to “maintain custody of all pieces forming a part of the historical collection owned by the Friends of the Library pertaining to the City of Venice and its history.” In July 1991 the Venice Area Historical Collection was moved to a storage space on the first floor of the newly renovated City Hall in downtown Venice. That same year, the name of the collection was officially changed to the Venice Archives and Area Historical Collection (VAAHC).

The collection was moved in September 1996 to the restored and renovated historic 1927 building known as the Triangle Inn. The name of the Venice Archives and Area Historical Collection was changed to the Venice Museum & Archives in 2012.